skip to main | skip to sidebar

I have been asked - what do you mean when you say that horses move each other around the field? This brings me on to the topic of body language. How much do we as humans give away just from the way we walk, stand, or sit? Can we manipulate other people’s behaviour just through the movement of our bodies? Horses are very sensitive to body language and certainly they are particularly sensitive to the silent messages they get from their fellow horses in a field. A dominant horse only needs to move near another horse, who is lower in the pecking order, and that horse will quickly move out of the way. This, essentially, is what I mean by horses moving each other around the field. Of course, as soon as you know this you can cash in on this sort of behaviour by moving your horse around i.e. you become the dominant horse. There is no bullying or cruelty involved in this as we are just capitalising on the horse’s natural behaviour. Surprisingly, what you will find is that rather than the horse getting irritated with you (wouldn’t you get irritated if someone kept moving you around?) they become more and more submissive, making licking gestures and keeping their heads down. Even Tally, who is never one of the most submissive horses, will stand perfectly still for long periods of time, move backwards, swing his hindquarters around on command, and allow a rope to be curled around both his fore and hind legs without moving an inch.

There is one area where a horse’s extreme sensitivity to body language can sometimes work against us. That is when we are riding them! How does your horse know that this is where you are going to speed up? - especially, if you are crossing an unfamiliar field. I tend to try to keep the idea of galloping or cantering out of my mind unless that is actually what I want to do. A couple of years ago Tally managed to deposit me in a clump of long grass and nettles. I really hadn’t had the intention of moving any faster across that particular field. But Tally picked up on some message/body language, became extremely excited, leapt in the air 3 times and then at the 4th flybuck I became unstuck. Of course, then Tally’s plans changed – he no longer wanted to gallop off but rather moved around me in an embarrassed circle. ‘Oops seemed to have lost my rider!’ I am not sure whether he understood my body language/expletives but he certainly behaved a little better on the homeward journey.
Posted by Dr. Julie Coultas at 06:42 28 comments:

Do horses remember? Tally and I moved back to a livery yard after 6 years away. Some of the people there are friends who I have continued to have contact with in the intervening years. Occasionally, Tally and I have hacked for two hours over the Sussex Downs to visit the yard where Tally would be given a haynet whilst I had a cup of tea. Now we are back and I requested that Tally be in a field with his old friend George (from 6 years ago). They have said hello to each other in the intervening years across the fence when we have gone for a visit. But do they remember each other as we humans remember old friends? At this point for anyone who takes exception to anthropomorphising please read no further. I am aware that I am already falling into that trap of talking about Tally as human and am happy to continue. When he is not leaping in the air and depositing me on the ground Tally is my equine companion, my friend!

Tally went out into the field at his new yard for the first time last week. His old friend and two other horses were already out. There was the usual, initial galloping round the field at break-neck speed. Then it was the other horse (Herbie) that followed Tally closely round the field monitoring his every move, eating grass right by his nose. Now years ago I would have thought how sweet, falling into the anthromorphic trap? Now I think quite cynically about this behaviour; Herbie is quite dominant and needs to find out as much as he can about the new horse, Tally, in the field. What better way to do it than to stick close where you pick up scents which probably give the other horse an indication of how potentially dominant the new horse is. All the horses in the field are male (geldings not stallions). Herbie can then decide how much he will move the new horse around the field. Horses literally do move each other around the field and if you watch closely you can begin to work out the pecking order in a field of horses just by watching who moves who. George waited and watched and later that day he and Tally were grazing side by side. I like to think that George didn’t need to check out his old mate Tally as they remembered each other.

Horses tend to remember things that are important to them. If something in the landscape that we ride through has changed from the last time we rode that way Tally will tend to spook. It can be something as innocuous as a gate lying on the ground rather than upright. Something in the horse's evolutionary past has caused them to be wary of change in environment. Even when the change is in inanimate objects e.g. gate upright/gate fallen or piles of earth or manure in a field that was empty last time we rode through. Some horses are spookier about these things than others. I haven’t thought about it before but memory has a strong link to intelligence certainly in humans – as measured by IQ tests. Perhaps the horses with better memories i.e. more intelligence are spookier?

Remember horses are prey animals and they should flee from anything that looks like a predator. Even if a horse turns out to be mistaken a large proportion of the time he is prepared for the time when the threat is real (e.g. a lion is just about to pounce) and will have a well honed flight reaction. If you think about those amazing series of Stubbs paintings ‘Horse frightened by lion’ - that horse’s flight response was not so well honed. But it did give us some of the most wonderful horse paintings in existence.
Posted by Dr. Julie Coultas at 06:39 No comments: 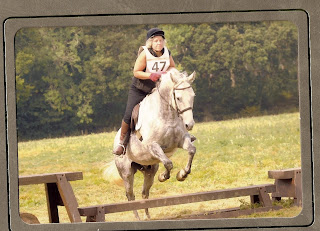 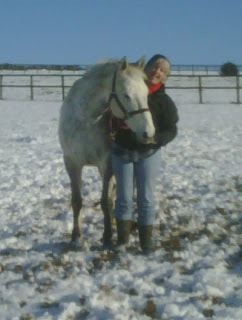 The main character on this blog is Tally, a thirteen year old dapple grey gelding. I use the term ‘character’ deliberately as he has, at times, been labelled a rascal, mischievous, frisky, flighty, full of fun, and a ‘trasher’ (more about that later).

Tally is Thoroughbred/New Forest cross which means that his mum was a registered New Forest mare and his dad was a point-to-pointer who had won a few thousand at the races. Tally is also quite fast when he decides to remain horizontal rather than vertical i.e. gallop rather than erupt into massive bucks when he gets excited!!

One other thing about Tally – he looks like his grandfather, the stallion Kalaglow, whose painting is in a gallery in London.

Straight from the Horse's Mind

Observations on horse and human behaviour